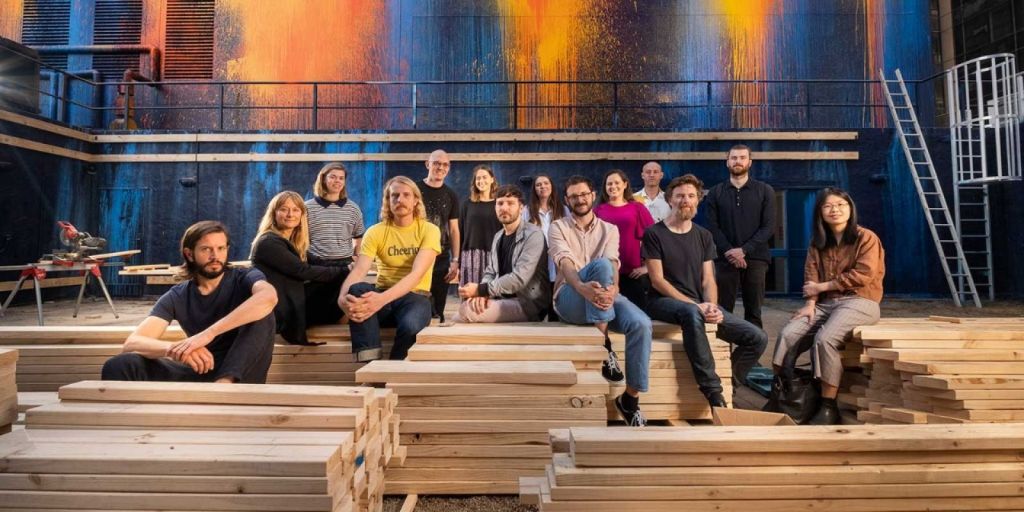 This story was first published on 16 March, 2021, on racv.com.au/royalauto

A group of engineers, architects and free thinkers are hatching a bold plan to transform Melbourne into the first fully self-reliant city in the world.

Imagine a Melbourne that runs entirely on renewable energy, a world-leading city that is water neutral and produces zero waste. This sustainable, utopian future is not only entirely achievable by 2030, it could also be profitable, says Ross Harding, of sustainability consultancy Finding Infinity, who is driving a bold plan to transform our city of five million into a net producer of resources rather than a net consumer.

Early last year Ross, who has a background in mechanical engineering, finance and ecologically sustainable design, invited 15 architects to his house for wine and a chat. His team had been crunching the numbers on what it would take to make Greater Melbourne, with its 31 municipalities and complicated layers of authorities, completely self-reliant by 2030. They identified 10 initiatives to make the transformation possible, including electrifying all transport, treating and reusing sewage and stormwater, and banning the sale of products destined for landfill.

Ross then asked the architects, who hail from firms such as Six Degrees, Fender Katsalidis, Hassell and John Wardle, to each choose an initiative and design a pilot program that would show people how it could actually be done. Why wait for governments to move when you can kickstart the process by working with the private sector today?

The 15 pilot projects, which Ross is confident will all be successfully completed, are detailed on the Normalise It website. The site also outlines how the $100 billion investment needed to transform Melbourne to a fully sustainable city could pay for itself in 10 years, generating about $14 billion in annual revenue, as well as creating 80,000 annual construction jobs and 40,000 ongoing operations jobs. All using technology that is already available.

“This … builds on case studies from cities around the world and proposes practical solutions to make better, healthier municipalities across Greater Melbourne while generating jobs and economic opportunities,” writes Melbourne Lord Mayor Sally Capp in her forward to the accompanying report, A New Normal. “In our recovery from the bushfires and COVID-19, we have an opportunity to reimagine and transform our city with a vision for the long term while solving our short-term challenges.”

The vision is ambitious. In just 10 years Melbourne would halve its fleet of 2.6 million cars and convert all transport to electricity, existing homes would be refitted to become energy efficient and all gas would be replaced with renewable electricity, 150 anaerobic digesters around greater Melbourne would turn food waste into energy, the Latrobe Valley would transition into an agriculture and solar-power hub, a new circular economy would reduce landfill to zero, and all sewer water would be treated and reused.

Petrol stations could be repurposed as EV conversion centres.

“We can follow the rest of the world and try and get there by 2050, and do it slowly. Or we can lead the world, and profit from the transition,” says Ross. “The longer we wait the more it’s going cost us.”

For now, the public will get a chance to engage with the concepts as part of Melbourne Design Week, via installations created by the collaborating architects on the top floor of 130 Little Collins Street, a building earmarked for demolition. A New Normal (26 March to 5 April) will feature soundscapes, canned recycled water, an indoor greenhouse, as well as a series of serious discussions and talks, but it is primarily meant to be intriguing and fun, says Ross. “We’re aiming for curiosity, rather than jamming it down people’s throats.”

The wider aim is to normalise ideas that have traditionally been considered environmental, green or too political. It’s to empathise with everyday Melburnians and show them that we’re all in this together, says Ross.

“I think it still seems like a far-fetched, radical, crazy idea for people – that you could have a city that has no negative impact on the environment, or actually has a positive impact on the environment. A city that operates on resources that will never run out. They seem like just completely crazy ideas. And it’s totally possible. It’s not only possible, it’s financially viable. It’s profitable. And it’s also entirely inevitable.”

You can see details of all 15 A New Normal pilot projects and read the report at normalise.it. Here are six projects that particularly caught our eye.

A “retrospective art gallery” would draw attention to our unhealthy landfill habit.

Melbourne has 2.6 million cars that run on oil. Why wait to buy a new EV when you can convert existing vehicles for just $13,500 each? This is the pitch from these three firms which hope to help Melbourne to electrify all its transport by demonstrating that it is possible to convert an existing petrol station into an electric car conversion centre. “We’re looking for the first petrol station to showcase this technology as an example for the city,” says Theo Gouskos, managing director of Greenshoot Consulting. In Germany, VW and eClassics recently launched electric conversion kits for classic VW Beetles, while in smog-choked Mexico City mechanics are already converting combustion engines into EVs at a cost of US$6000 per vehicle.

If Melbourne is to rely on renewable energy, storage will be crucial. Given cars are parked 96 per cent of the time, why not recruit the city’s 1.3 million cars as portable batteries? To show it can be done, Hassell’s David Harrap wants to turn one Melbourne multi-storey carpark into a “cultural battery pack”, where people park their electric cars in the evening and the cars’ batteries power live performances within the space. “The carpark is activated, the surrounding area is transformed,” says David. “The building connects the city’s people and is enlivened by it.”

Researchers at the Lawrence Berkeley National Laboratory in California recently published a study showing several billion infrastructure dollars could be saved by using EVs as mobile electricity storage. And in Germany and the UK, Nissan has been running vehicle-to-grid trials using its Leaf mode, which enables electric cars to transfer energy back to the grid when not in use. Closer to home, the car manufacturer announced in July last year that the technology would be coming to Melbourne too.

With 10 times more rainwater falling on Melbourne than we consume each year, and Melbourne Water forecasting water shortages as early as 2028, addressing the problem of stormwater is crucial. The team from NMBW propose consolidating car parking at one end of a suburban residential street and turning the rest of the street over to pedestrians, bikes and shared electric vehicles. By removing asphalt, parking and driveways, large canopy trees can be planted, and verges can be rewilded with native species, helping to filter stormwater that might otherwise pollute our creeks and rivers. “We are looking for a collection of residents in the right suburban street,” says NMBW’s Nigel Bertram, “to act as a case study and to help get things started.” In an Australian first, Perth’s drinking water aquifer is already refilled with treated wastewater and naturally filtered until needed. And in Singapore, reclaimed water treated and used for drinking has been branded NEWater and makes up to 40 per cent of that city’s supply.

Architects from Wowowa propose installing an anaerobic digester at Fitzroy Swimming Pool to heat the water and power a nearby park barbecue.

The project: Anaerobic digesters generate power and fertiliser across the city

Melbourne currently sends 1500 tonnes of food waste to landfill every day. But by installing 150 anaerobic digesters across the city we could prevent that and generate bio-gas and fertiliser in the process. As a case study, architects from Wowowa proposed installing a digester at Fitzroy Swimming Pool, where it could heat the water and saunas and even power an adjacent park barbecue. Six Degrees Architects envisions a digester near the soon-to-be reclaimed carpark at Queen Victoria Market, where hundreds of tonnes of organic waste are generated every month. The device could power a generator to screen films at a public outdoor cinema, and fertiliser could be sold to the market’s many produce growers and suppliers. It’s already happening at Disney World in Florida, where an anaerobic digester turns food scraps and treated sewage into electricity for the resort’s theme park and hotels.

The project: Build a floating ‘retrospective art gallery’ on the Yarra

In order to kick our 6500-tonne-a-day landfill habit and move to a circular economy, we need to ban all products destined for the tip, says Ben Shields from Dreamer. To accelerate public support for this radical shift, his firm is proposing a floating art gallery on the Yarra River, in Melbourne’s arts precinct. The permanent collection, a series of “landfill cores” made up of extracted waste, would be navigated by visitors using an augmented-reality app, helping them explore each item that needs to be eliminated in order to live in a city without waste. “Together we can turn our waste problem into an exciting opportunity,” says Ben, “but we need your help.” Overseas, traditional glass-bottle milk deliveries are returning to popularity in London, and Germany has ‘reverse vending machines’ that spit out cash for returned plastic and glass bottles.

The project: Build a ‘cathedral of circularity’

A circular economy would generate $4.5 million for Melbourne’s economy each year, but it would rely on a philosophy of fix, repair and reuse. To show people how it could work, Aaron Roberts from Edition Office is proposing a social enterprise (built in an existing repurposed building) that teaches people how to repair items, offers refurbished products for sale, and has a tool library and repository where parts are stripped down, sorted and archived for easy future access. For naturally inclined tinkerers it would be their church, says Aaron. “A cathedral of repair.” Costa Rica is the first country to completely ban single-use plastic, China is banning plastic bags across all cities and towns in 2022, and South Australia made history last year when it became the first Australian state to pass laws banning single-use plastics such as straws, cutlery and beverage stirrers. Last month the Victorian government followed suit, announcing plans to ban single-use plastics by February 2023.

This story was first published on 16 March, 2021, on racv.com.au/royalauto