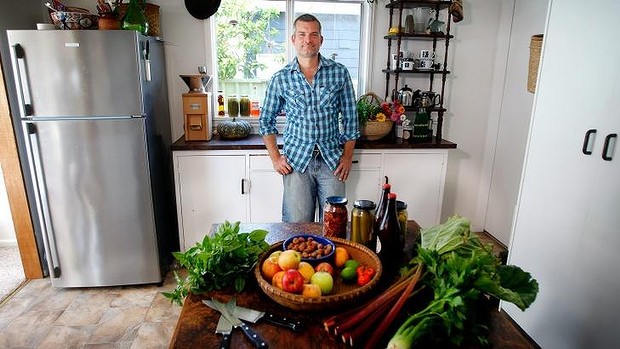 Nick Ritar, 43, grew up on a national park in far western NSW but these days he lives in a bungalow, on the banks of the Minnamurra inlet in the Illawarra. “We’re renting at the moment but we’re incredibly blessed to have a bit of time here. Literally, my kitchen is 10 metres from the river, so we spend a lot of time outdoors. We’ve got a little vegie garden we established over the last year and that produces a hell of a lot of our food.” And so it should. Ritar, with his wife Kirsten Bradley, established their permaculture school Milkwood nearly a decade ago. It’s a one-stop-shop for classes in everything from keeping bees and growing mushrooms in your bathroom to fermenting food and aquaponics. The couple live and cook with their seven-year-old son Ashar.

We always have Demeter Farm organic whole wheat for making bread and pizzas, and oats for porridge; there’s Rosnay Organic extra virgin olive oil, which we buy in bulk, as we do for nuts and anything else we don’t grow; and we always have fresh pastured eggs and ghee, from our friends at Buena Vista Farm up the road. The rest of our pantry is packed with stuff we’ve produced ourselves, including passata, pickles, honey and dried mushrooms (great ground into a powder and added to lamb stews for extra flavour).

The bottom draw is always filled with excess stuff out of the garden, waiting to be preserved. At the moment there’s lots of Armenian cucumbers, cherry tomatoes, eggplants and scarlet runner beans, which I either eat very young or wait until they dry out on the vine and use for dry storage. We get a 10-litre bucket of milk every Wednesday from a friend with a cow and on Tuesdays we use whatever is left over to make cheese, including ricotta and paneer.

Some friends produce an amazing chocolate called Spencer Cocoa. It’s single plantation from Vanuatu, 100 per cent ethical and super-high quality. We buy big packets of it every couple of months.

I drink hand-pressed espresso (from The Daily Grind) and lots of water kefir, a fermented probiotic drink that tastes a bit like iced tea. We get ours from the Buena Vista Farm, which does a ginger and a strawberry one. Recently Kirsten made a big batch of lilly pilly gin, which is a kilo of lilly pilly berries steeped in a bottle of Bombay Sapphire for a month. It has an incredible clove-like flavour. Otherwise, I don’t mind a Coopers Pale Ale and we drink a bit of Rosnay Organic wine. They do some great light reds.

I love my classic Wusthof cooks’ knives and the fact that I can take my ROK espresso machine camping (it doesn’t need power). I’ve always been a big fan of cast-iron skillets and pans and lately I’ve been using these incredible Solidteknics pans, which are world-best quality, made in South Australia. It’s beautiful stuff – Kickstarter funded them – they’ve only been around for about 12 months.

I’m a bit of a geek and I love the bio-complexity of wild foods so I’ve always been a fan of [food writer and activist] Sandor Katz (we brought him to Australia). But lately I’ve been inspired by David Asher and his work in wild cheesemaking. It’s just incredible – that idea of capturing microbiology out of the atmosphere and that’s in the milk, and using that to make cheese. A good place to start is his book The Art of Natural Cheesemaking.

We use our gorgeous Schnitzer grain mill every day. It’s a top-of-the-range stone mill. We’ve always baked bread and made pizzas but when you buy wholemeal flour it can taste like crap. When you mill fresh grain into flour, the wholemeal flour is as light as white flour. It’s really different.

I’m really into mushrooms and one of the first things that turned me onto them was a meal I had at the Courthouse Hotel in North Melbourne, years ago. I had a cauliflower and truffle soup and the flavour of the truffle just blew me away.

Palak paneer with wild greens, spinach, silverbeet or chard. It’s an incredibly spicy, stewed, spinachy dish with fried cheese in it. I serve it over rice and it’s just phenomenal.

Home-made harissa. It’s just the bomb. We have it on everything. It’s pretty hard to convince our seven-year-old boy to eat spicy food so we just have this jar of fresh harissa handy and spoon it onto our own food.

This story was originally published in Epicure Good Food on 17 May, 2016.