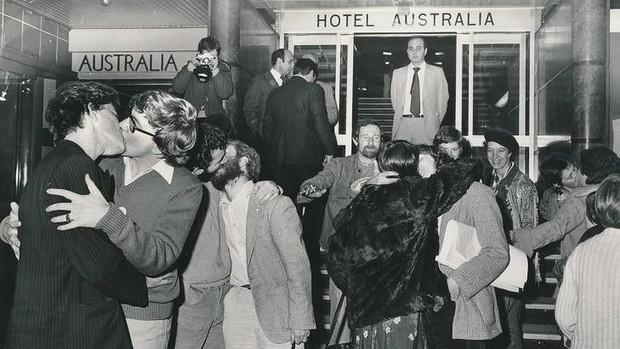 Melbourne, 1979. Protesters kiss outside the Australia Hotel after two men were convicted of the charge of offensive behaviour for kissing on the same spot. Image: The Age library

It was an honour to be in the public gallery at Parliament House in Victoria recently with a special group of people. Among them were activists, academics and gay men there to watch politicians from all sides stand up and speak in bipartisan support for a long-overdue piece of legislation: the Sentencing Amendment (Historical Homosexual Convictions Expungement) Bill 2014 (Assembly initiated). In other words, a bill to expunge the records consensual gay sex convictions.

Consensual sex between men was decriminalised in Victoria in 1981 but there could be thousands of men who have been carrying convictions recorded prior to that, bearing all the shame and social stigma that goes with it ever since.

Town planner Peter McEwan was among a key group of gay men who made their stories public to make politicians  understand why something needed to be done. I’d like to thank him, Tom Anderson and Noel Tovey particularly for their courage and candour. They’ve done Victoria a great service.

Read the full story story “Gay sex nothing to be ashamed of” published in the Age on Friday October 31, here.