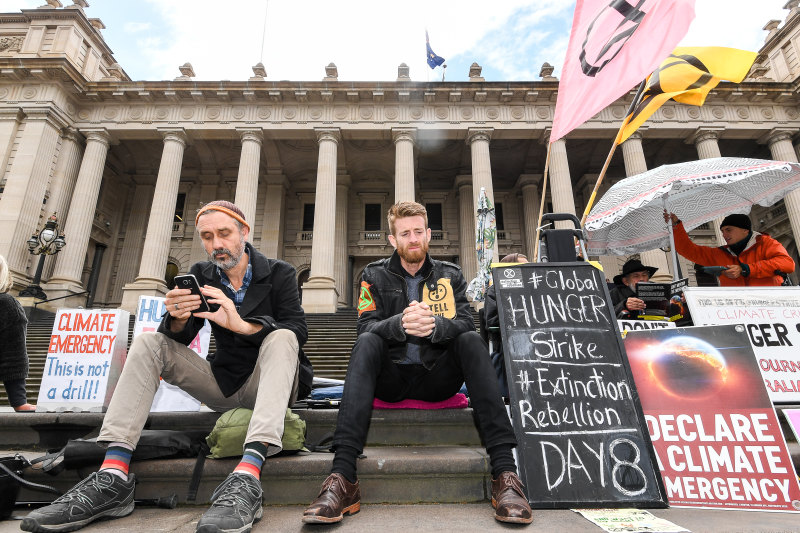 My story in the Sunday Age today looks at how history may help us create consensus on action to counter global warming. Picture of Extinction Rebellion protester Daniel Bleakley by Justin McManus.

I’ve only been to the Little Desert – a patch of semi-arid bushland in Victoria’s west – once in my life. It was April 1986, I was 12, and my family was camping there to see Halley’s Comet, a cosmic experience that won’t happen again on this planet until 2061.

I don’t remember much about that trip, but thanks to my mother’s meticulous diary-keeping I do know there was frost on the tent in the morning, we saw a few emus, and that the comet resembled a big “fuzzy ball”.

However, over the past year I’ve had cause to learn a lot more about the place, which locals used to call ‘the scrub’. In April, Victoria’s peak non-government organisation Environment Victoria, commissioned me to research their history and write a book to celebrate its 50th birthday, People For The Planet.

The story begins in the Little Desert in the late 1960s with a plan by Victoria’s Minister of Lands, Sir William McDonald, to transform and subdivide the relatively untouched bushland into sheep farms. A broad coalition of the public joined forces to protect it, forming the Save Our Bushlands Action Committee.

Furious letters were written to The Age, politicians lobbied and radio stations flooded with talkback calls.  Supporters included Ros Garnet (a biochemist and naturalist with friends in the Communist Party), Claude Austin (grazier, ornithologist, president of the Melbourne Club and regular golf companion of the premier, Sir Henry Bolte), along with nature enthusiasts, scientists, bird watchers and duck shooters.

These diverse tribes somehow put aside their political and social differences for a single, ultimately successful campaign. At the state election in 1970, Bolte’s Liberal government was returned but McDonald lost his seat. Campaigners for the Little Desert had won.

The campaign also gave rise to the 1969 birth of the Conservation Council of Victoria (now Environment Victoria), a peak body designed to give single voice to the many conservation groups and community environmental organisations operating in Victoria.

Fast-forward to 2019 and the climate change debate and the Little Desert’s genteel, civilised approach seems fanciful. Today’s reality is a supercharged furnace of polarised politics, ideology and endless, paralysing spin. Where do we go from here?

It’s just before 9am on a Friday morning in late November. On the steps of Melbourne’s Parliament House, a trolley stacked with Extinction Rebellion (XR for short) placards is wheeled into place. Pink and yellow flags bearing the movement’s distinctive hourglass logo are slotted behind a chalkboard that reads “Global hunger strike, Extinction Rebellion, Day 4”.

The man forgoing food is Daniel Bleakley, 37, a clean-cut mechanical engineer dressed in black jeans and a white collared shirt. He’s one of more than 500 hunger strikers around the world, a protest designed to pressure governments into acting more swiftly and comprehensively on what more than 11,000 scientists call a climate emergency. “I’m feeling pretty good,” says Bleakley of his physical state. “I’m alert and focused. It’s a strange feeling – it’s almost like you feel weary but you’re also dialled-in, you’re also quite focused.”

Bleakley has been recounting how he became involved with XR, a decentralised global movement that made waves in London in April by shutting much of the city down for 11 days. The movement has three demands: that governments “tell the truth” and declare a climate and ecological emergency; that they act now to reduce greenhouse gas emissions to net zero by 2025; and that they create and be led by a “citizens’ assembly” of random, non-politically affiliated people advised by experts. In London, more than 1000 protesters were arrested but soon after the British Parliament ceded at least one of their aims, declaring a climate and environment emergency.

Bleakley grew up in Queensland’s Clermont (coincidentally the closest town to the controversial Adani coal mine), studied in Brisbane and soon became interested in global warming and renewable energy production, which led to him writing countless letters to politicians agitating for more action. He moved to Melbourne in 2014 and began to feel increasingly frustrated by Australia’s climate change response. “After the [2019] Federal election a friend of mine told me about Extinction Rebellion and it sounded great to me, so I joined up.”

Since then he’s been involved in several protests and civil disobedience actions, including blocking King Street with his bicycle so other XR members could glue themselves to the bridge. “I’d never done anything like this in my life,” he recalls. “It was really scary and I was really nervous but I wanted to make sure that this action was a success. We had these banners and waited for the lights to turn red and crossed the road to stop the traffic. There was a guy in an Audi who was slowly creeping forward and beeping his horn but I just had to look at him, shrug my shoulders and say, ‘sorry for the inconvenience but I’m not moving’.”

A report in The Age detailed some more of the commuter fury that day, including one woman who said: “I support their ideas but not protests like this. I’m going to be very late to work.”

Although non-violent, XR’s civil disobedience tactics have divided public opinion, with some criticising police for being too slow to move protesters on while others cheer from the sidelines in solidarity. In response to similar XR actions, the Queensland Parliament passed laws to ban lock-on devices and Prime Minister Scott Morrison flagged measures to crack down on what he calls “economic sabotage” and “indulgent and selfish practices”.

So how do the established environmental organisations view the rise of XR? In October, the outgoing national campaign director of the Wilderness Society, Lyndon Schneiders, said he hoped the movement would not hand the fossil fuel lobby more power. “In a democracy, if you don’t have a significant part of the community really supporting your actions then you are potentially going to create further polarisation that won’t lead to the results that XR wants to see,” he said. “I would encourage them to think about that in the context of Australia.”

Jono La Nauze, CEO of Environment Victoria, says XR is simply another welcome actor in the battle to secure real action on climate change. “We’re facing an extraordinary crisis and it is absolutely no surprise that ordinary people are very angry and taking to the streets. In that context we understand and support the right of people, including people involved in XR, to raise the alarm through disruptive protests and civil disobedience to draw attention to the existential threat we’re facing.”

Civil disobedience has some celebrated precedents, too. The legendary sit-ins of the US civil rights movement and hunger-striking suffragettes in Britain and Ireland are proof that these tactics work.

Clive Hamilton, academic and author of What Do We Want: The story of protest in Australia, goes further to say established environmental groups have become “sidelined” by a “deliberate and calculated” strategy of polarisation by the fossil fuel industry and the influx of “forces of climate denial” into the conservative parties.

“Reaching agreement on an effective response to climate change has become exceptionally difficult at a federal level,” says Hamilton. “That has meant that an enormous amount of frustration has built up amongst those that accept the science and can see the need for action that becomes more urgent as every year goes by.”

School climate strikes and the emergence of Extinction Rebellion over the past year, he says, is a natural expression of that frustration. “The tactics of the right and the fossil fuel lobby were always a delaying tactic to stop the inevitable. Sooner or later humankind must respond to the science because the consequences of not doing so are catastrophic, as we’re now seeing with the bushfires. So the new kinds of protest in a way have highlighted the ineffectiveness of traditional environment groups operating within the usual institutions of democracy to bring about the kind of change that’s necessary.”

In a postscript to What Do We Want, Hamilton writes: “Only environmentalism, at least in its more forthright form, truly challenges the structures of economic power … The supreme test will be protecting the Earth from climate change and in this struggle environmentalists must do what no other social movement has contemplated – persuade the political mainstream and the masters of the economic system to swallow demands that are deeply unpalatable.”

And that’s precisely where people on the other side of politics have a problem. John Roskam, executive director of free-market think tank the Institute of Public Affairs says changes in technology, the advent of powerful social media tools and the decline of established political structures have led the environmental movement to become ideological.

On one hand this has given environmentalism a much broader reach but, he says, it has also limited it. “By making it so explicitly ideological it has become almost religion-like and it now becomes a question not of do we save a tree, a lake or a historic building – but it is how do you believe you should live as a human being? And so, we have transposed from policy to religion.”

Jane Morton, 67, has just spent the day in Melbourne Magistrates’ Court. Along with dozens of other Extinction Rebellion protesters she was arrested in September while blocking Princes Bridge. These days she has semi-retired but the arrest and possible conviction could have consequences for her registration as a psychologist (a risk she is happy to bear). The XR volunteer organiser says her main role now is to give introductory talks about how the planet is heading for extinction and what to do about it.

During the week of the ‘Spring Rebellion’ in October their numbers grew by 2600. “We grow by hundreds every week without even really trying. People just come to us. And I don’t think we’re pinching them from the NGOs, they’re people who have been in despair, basically. Despair about the science and in despair about the politics. The combination is just diabolical.”

She says more actions are planned for early December, when the UN hosts a climate change conference in Madrid, and then the next XR “wave” of rebellion will start on April 13, 2020.

Back on the Parliament steps Daniel Bleakley says the Spring Rebellion was the best week of his life. He is struck by the diversity of the movement, which he says includes doctors, teachers, engineers, truck drivers, the young and the old. “There’s also a re-gen culture that’s going on. There’s talk about what happens when we do start to fix this. How do we strengthen our communities; how do we all help each other out through this crisis? It’s a real coming together of people.”

The success of the Little Desert campaign shows that when people share a passion for something they can put aside political differences and become a force for change. And with a recent Lowy Institute survey revealing six in 10 Australians view global warming as a “serious and pressing problem” that requires urgent action, perhaps support for change is stronger than some politicians and media like us to think. The question remains: will Australians be inspired or alienated by the rebellion?

This story was firs published on 1 December 2019 in the Sunday Age.