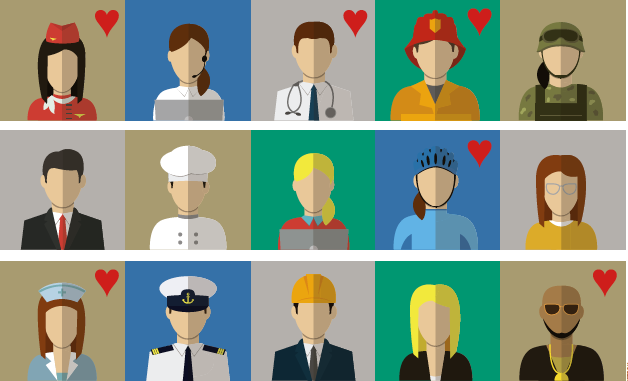 I wrote a story about how the profession you have may influence how successful you are on dating apps for The Weekly Review this week. See how it appeared in print here or check out the story below. The illustration above comes from iStock.

There was the guy whose Tinder profile said he “worked with animals”, only to reveal on his first (and last) date that he worked with them in a laboratory.Another said he had a job in a toy store when in reality he worked in a role-playing game shop. “I thought you’d judge me,” Warhammer-guy argued in self-defence. She did but now they’re together.

The world of online dating is difficult enough without worrying about how your job might affect your chances of attracting a mate. But there’s evidence to suggest that’s exactly what’s happening.

Last year, popular dating app Tinder surveyed its 2.5 million users and released a list of most right-swiped (read attractive) professions. ‘‘Flight attendant’’ was the most alluring male profession, while ‘‘swimming coach’’ landed top spot for women. At the bottom of the 15 male occupations was ‘‘pilot’’, and, for women, it was ‘‘actress’’.

Meanwhile, male ‘‘marketing coordinators’’ (ranked two) were sexier than ‘‘firefighters’’ (11) and ‘‘doctors’’ (14), while for women, generically titled female ‘‘students’’ (two) were deemed wildly more desirable than their sisters-in-law, with ‘‘law students’’ way down the list at 11. Go figure.

But the statistics are not uniform, either. A 2013 Coffee Meets Bagel study showed doctors at the top of the list of jobs women found attractive while women working in start-up companies were most attractive for men.

At Fairfax Media’s RSVP, women in advertising, sales and marketing were most successful, while the top male job may surprise. “Although the real estate market has come off a little recently, men in real estate are still the most popular when it comes to receiving kisses on RSVP,” says Dave Heysen, RSVP’s CEO. In both gender categories, people in transport, logistics and government fared least successfully.

But do people really care what job someone does when they’re looking for a love match? “I really, really do,” says Jane*, a writer in her 30s who has been using dating apps Tinder and Bumble for the past two-and-a-half years. “But I’m more wary about people I don’t date.”

On her list of no-nos are musicians (she dated one when she was younger and doesn’t care for the late night, party lifestyle), chefs (same reason) and men in the IT industry (twice bitten, three times shy). “I think a lot of people are drawn to opposites and there’s an attraction there that’s probably biological,” she says of her IT fetish.

David*, a user of apps including Bumble, Tinder and Jewish dating app JSwipe, recently changed his profession to ‘‘tool and dye maker’’ with a note at the bottom of his profile that said: ‘‘not a tool and dye maker’’. Why? “It seemed funny and a good talking point,” he explains. “It’s all about making conversation rather than anything else, initially.”

Since the change, David, who is really a tech-start-up investor, reports zero matches, which suits him because he’s now in a relationship. Previously, he listed himself as a ‘‘venture capitalist’’ and confesses he worried about what kind of people the title might actually attract.

Meanwhile, Susan*, a 35-year-old Melbourne designer, recently spent several years looking for love in the US. For safety, she never dates anyone she can’t snoop up on first via the internet and listing a profession, she says, can be helpful in that regard.

“I was going to go out on a date with a guy and I couldn’t find out anything about him,” she recalls. “He said he was a graphic designer in a [certain] neighbourhood – but I couldn’t find any information about him. So, I ended up doing a reverse Google image search on his photos and they were all fake […]. He was a total catfish.” Susan went on to block and report the man, not to mention sharing his phone number with several male friends who were able to call him up and let him know what they thought of his online dating behaviour.

Relationship expert and dating coach Samantha Jayne says that while women are interested in potential mates with careers that imply intelligence, power and status, men care more about looks and a ‘‘nurturing’’ personality. “It does come back to something really primal,” she says. “I don’t think men are as threatened by successful women as much as how it feels for him,” adding that while some men might feel intimidated, for most it’s just about knowing that she will have time for him in her busy life.

And there’s the rub. At the very least, people absolutely do care what job their potential lover does – if only to make sure compatible lifestyles offer the ability, in this busy world, of being able to go on a date in the first place.

* Names have been changed to protect subjects’ identities. Apps including Grindr, OkCupid, Gaydar Girls and Bumble were contacted for the story but were unable to comment by deadline.

This story was first published in The Weekly Review on April 16, 2018.