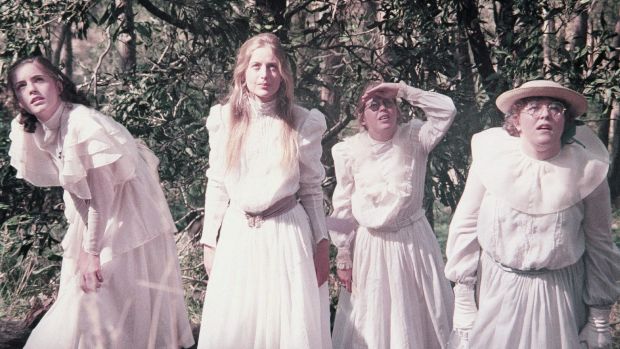 If, like me, you marvelled while your school bus rolled the wrong way up a hill and you then spent the day exploring the spooky, 6.25-million-year-old lava terrain of Hanging Rock in Victoria’s Macedon Ranges, the past few weeks have probably brought back a few memories. Timed to coincide with the 50th anniversary of Joan Lindsay’s book Picnic At Hanging Rock, Janelle McCulloch’s nonfiction work Beyond The Rock digs deep into the life of the author, her mysterious novel and the making of that haunting and iconic film adaptation by Peter Weir in 1975.

I first saw the film as a sub-10-year-old. It was at the Dromana drive-in and, although things can get pretty jumbled up when you peer back from the age of 43, I’m pretty sure it was a double-header with Steve Martin’s The Man With Two Brains. The spooky pan pipes, the whiff of truth about the story, the ants, the several large Cokes I drank, they all conspired to etch the film deeply into my giddy consciousness.

The recent rekindling of interest in the story led me to discover that in draft stages Lindsay wrote an ending to the story, explaining what happened to the missing girls. Chapter 18 was deleted before the book was published but it was later printed in a 1987 book called The Secret of Hanging Rock. You can read it online, if you like. I did. And it was a revelation.

It turns out Lindsay could have easily written for Doctor Who. Think floating corsets, time portals and a witch-like shape-shifter who turns herself into a reptile/crab who finally slithers into a crack in the rock. I won’t say any more about the girls (spoilers) but it was way cooler than the ending we got.

Meanwhile, filming for a six-hour Foxtel Hanging Rock miniseries reboot is under way. Besides some controversy around the hiring of Canadian director Larysa Kondracki (two Australian directors are also involved) the real issue, I believe, is that the production has confirmed they are using Lindsay’s original novel as the basis for the plot. That means no crazy Chapter 18, no time portals and no weird snake ladies. Boo! Instead of an original, daring and creative re-imagining of an iconic Australian story we get a nostalgic facsimile told in a “modern” way. In other words, jump cuts.

It’s an opportunity missed and probably reflects how conservative things are in film and television at the moment. The original producers took a chance on Peter Weir in 1975. If we have to rehash our old stories, let’s take a chance on imagination and creativity.