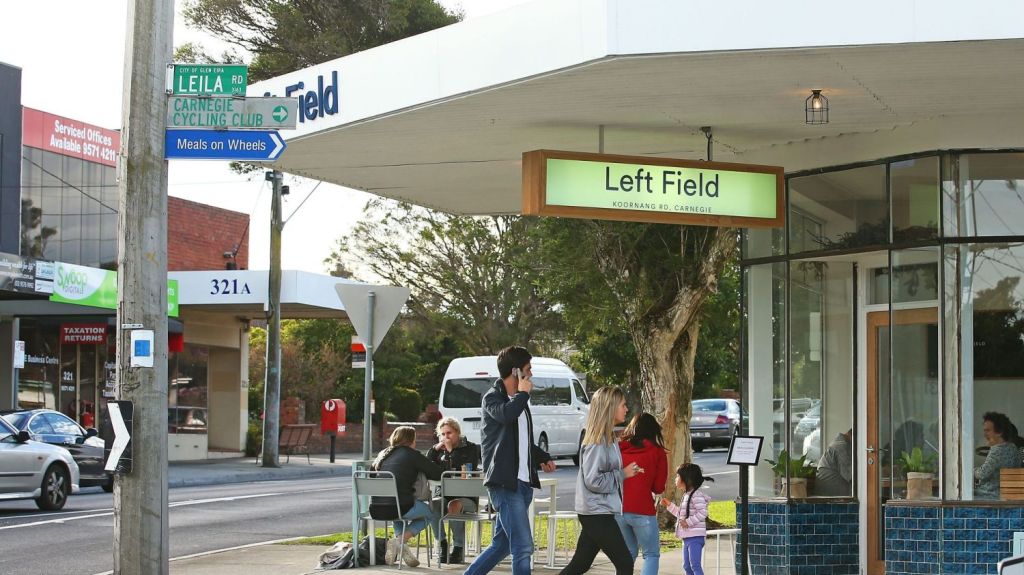 Carnegie locals are getting used to something new: queuing for their coffee. Photo: Scott Barbour.

On a previously sleepy corner of Koornang Road in Carnegie, locals are getting used to something new: queuing for their coffee. Then again, until Left Field cafe opened a year ago, they didn’t have a neighbourhood cafe at all. Head chef and co-owner Ryan Lording says wait times now vary from 10 minutes during the week to 1.5 hours on weekends. “It’s ridiculous. I’ve been cooking for 10 years and I haven’t seen anything like it.”

Left Field embodies a new wave of Melbourne cafes. Offering the quality food, serious coffee and smart design you’d expect from established cafe scenes in Fitzroy, St Kilda and Armadale, these savvy businesses are popping up in far-flung locations. Are they harbingers of booming real estate markets or do they influence real estate prices themselves?

In the US, authors of Zillow Talk: The New Rules of Real Estate, Spencer Rascoff and Stan Humphries call it the Starbucks Effect: property prices increase at a higher rate the closer you are to an outlet. While they believe the cafes are pushing prices higher, plenty of other property experts say it’s simply gentrification at work.

Here in Melbourne, Dave Sharry, 46, is behind many successful bars and cafes with business partner Richie Ludbrook, including Riverland, Pilgrim and the Wye River General Store and Cafe. Their latest, Bang Bang at the Rifle Club, in Elsternwick, opened in February. Next to a park and built on VicTrack-owned land to a Six Degrees design, it’s been a huge hit with locals. “We spent a lot of time there just trying to get a sense of the type of people that were there,” says Sharry, who took a similar punt opening Wall Two 80 cafe 20 years ago. He perceived then that younger people being priced out of St Kilda were moving to the conservative, eastern European suburb of Balaclava in droves. He was right.

Today in Elsternwick he sees an interesting mix of established businesses and senses that newer apartments and other residential developments are beginning to change the area. “That was encouraging,” he says, “and reaffirmed that it was a good place to do something.”

Local Elsternwick Biggin & Scott agent Bill Stavrakis says businesses like Bang Bang “absolutely” drive house prices up. “I think there is a very real improvement in the perception of the area when you get quality operators like that.” Stavrakis estimates it’s worth about the same as an agent who can negotiate well – about 10 per cent.

This three-level, three-bedroom converted warehouse is right in the heart of Collingwood. Photo: Nelson Alexander

In West Footscray, former cleaning business operator Leigh McCrabb opened his off-the-beaten-track cafe Brother Nancy after moving from neighbouring Footscray five years ago. “It was a pretty risky move … just because I am in the middle of nowhere, but we hit the ground running and 2½ years in, we’re still growing. It’s great.”

McCrabb says the great food by chef Jordi Boyer and social media bring new faces into the cafe every Saturday. “And a lot of them are young partners with [their] parents looking for property in the area,” he says. “And they all come in with real estate brochures.” McCrabb has developed a close relationship with agents in the surrounding area and says many of their customers are shared. Now he’s looking to open a second cafe in the coffee deserts of Sunshine or Braybrook. “It’s another big risk but if you have a formula – numbers don’t lie.”

Similarly, Rosanna locals Vanessa and Paul Parrella opened their pioneering cafe Miss Marie in 2011. In November last year they opened a second business, The A Team Kitchen, in nearby Watsonia, based squarely on their observations of the local real estate market. “The generation or the demographic that understand the cafe culture are having to move further from Melbourne,” Vanessa says.

Dr Andrew Wilson, Domain Group chief economist, says pioneering coffee shops like these mark the tide of property affordability. “I think [cafes] are a very interesting indicator, other than price signals, for the gentrification of a suburb and where demand is rising. As prices grow you get a different demographic … that’s more inclined to discretionary spending. And a key indicator with discretionary spending is eating out.”

It’s the end of another busy day rattling the pans at Left Field in Carnegie, and 31-year-old Ryan Lording, who lives in nearby Mulgrave, is pleased he doesn’t have that far to drive home. He and his partners own three other cafes: Prahran’s Tall Timber, Richmond’s Touchwood, and Armadale’s Coin Laundry. The long commute home was always a tiring way to finish.

Plans are underway, he says, to open two more cafes in the next 12 months. “It’s just a matter of finding the right suburb and the right location.” And where might that be? “I’ll keep that card close to my chest, just for now.”