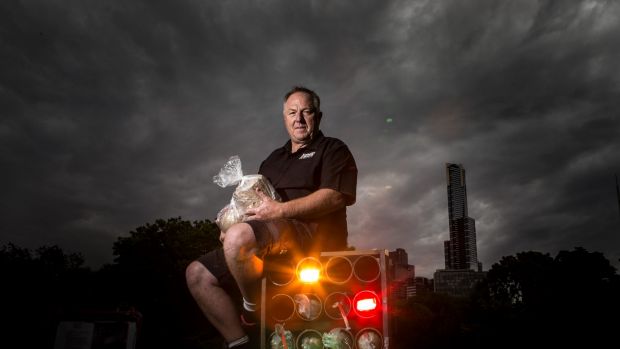 This will be the ninth year Howard & Sons pyrotechnician Rusty Johnson has been involved in putting on Melbourne’s New Year’s Eve fireworks display. Photo: Jason South.

For the ninth consecutive year, Rusty Johnson is fulfilling a childhood dream.

Now in his “late 50s”, Johnson says he came from a fine arts background before “dabbling” with explosions on secondary school stage productions, which he did for more than a decade.

“That sort of expanded and people obviously recognised that I had some small talent and Howard & Sons asked me to come on board; I’ve been there ever since. It’s a very good marriage and it gives me a chance to travel the world and blow stuff up.”

On Saturday night, he and 65 other pyrotechnicians will be setting off 13.5 tonnes of fireworks, worth $532,000, from 22 city rooftops and six ground positions. An expected 450,000 people will stream into the city to watch, although the displays – two 10-minute shows, at 9.30pm and midnight – are best seen wherever there is a good view of the CBD skyline.

Johnson says this year he has focused the design on shooting from rooftops, which is “quite unique” in the fireworks display industry. “We’ve worked very hard in developing product that throws wider and further and gives bigger scope across the city.”

This year viewers can expect to see a new range of “super-bright colours” and less smoke, too. “And lots of pastel colours, which you don’t often see in fireworks – it’s usually fairly primary colours – red, blue, green, yellow. This year we’ve got pastels and some super-bright blues, some beautiful ruby reds and stuff like that.”

But using so many tall buildings as firing sites brings unique challenges. “It’s a little bit more complex than just rolling up to an open paddock. You’ve got to look at where air intakes are; we’ve got to look at potential fire hazards – some building rooftops have fuel stored up there, so obviously they’re not good for us.” Johnson says it takes nearly a year to scope out sites and obtain permissions from building owners, with initial scouting starting in May.

Due to safety concerns you won’t see Johnson’s personal favourite firework, “Windchimes”, which “hang in the sky like big strings of lanterns” using parachutes to drift down (they are best used over water). But he has plenty of other favourites that will feature. For example, silver and gold Brocades (“a big aerial shell that hangs in the sky and drops like a willow tree”), Crackle (“a shell that goes white and has an enormous sounds to it, a crackling sound”), Peonies and colourful Chrysanthemums.

So, what’s left to say to the city’s chief pyrotechnician on the eve of a New Year’s Eve fireworks show but “break a leg”, perhaps? “We do say that in this business,” says Johnson. “We also say, ‘hang on to your fingers’.”