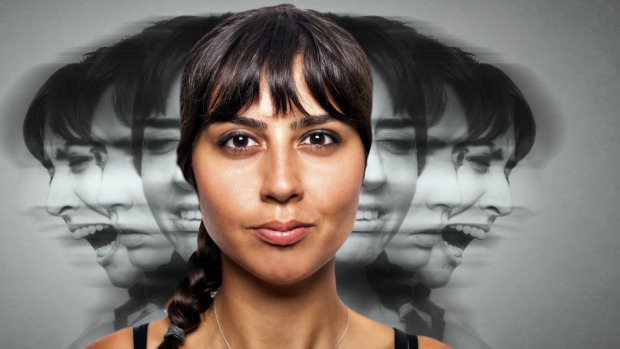 According to a survey, titled Picture This: How Australians picture mental illness, the most popular image depicting mental illness was of a woman surrounded by multiple profiles of herself in various states of emotional distress. Photo: Supplied.

What does mental illness look like? Last year, national mental health charity SANE Australia decided to find out. It asked 5000 people –70 per cent of whom had a lived experience with mental illness – to scrutinise six images and answer an accompanying set of questions.

The images, from Getty Images’ iStock collection, included a landscape, a silhouette of a person looking down-and-out in an alleyway, a graphic illustration of a brain and a woman talking to a health professional.

By far the most popular depiction according to the survey, titled Picture This: How Australians picture mental illness, was an image that showed a woman surrounded by multiple profiles of herself in various states of emotional distress. Nearly two-thirds of respondents agreed or strongly agreed it was a fair and accurate representation of mental illness.

The image deemed least appropriate showed a handful of pills scattered over a dictionary definition of depression. The full findings and recommendations will be released next week.

Cameron Solnordal, 40, was diagnosed with schizophrenia in his early 20s. “Basically the world stopped, and for the next 18 months I was in therapy,” he says, adding that after 10 years working in a bank it’s been only in the past two years that he’s been able to return to his passions of photography, writing and film.

He’s also become father to a nine-month-old-son. “We’ve all been raised, since the ’60s and ’70s when there was the introduction of a far greater visual medium, with stereotypical imagery. I don’t see it as malicious or malevolent I just see it as inadvertent.”

Solnordal believes a shift in depicting mental illness is needed in order to encourage a positive shift in treating it. “If I had gone into it on day one and given up and basically said, ‘OK, now I have to adopt all these principles, all these stereotypes and all these mannerisms of a person with schizophrenia,’ then right now I’d be sitting on a street corner carrying bags.”
It’s a view that SANE Australia CEO Jack Heath shares. He estimates more than 700,000 Australians are living with severe mental illness each year, affecting a network of some four million family and friends. “If I’m someone who is encountering the symptoms either myself or a family member seems to be [displaying symptoms], if I automatically associate that with issues of violence or those people being completely out of control…I’m then worried about going and seeing a doctor or sharing my story.”

The delay in seeking help, he says, can lead to huge human and financial costs. “The Picture This survey results show that Australians want to see images of real people that convey a sense of both struggle and hope.”

Stuart Hannagan, Vice President of Editorial at Getty Images’ Australasian bureau, hopes the report and an accompanying exhibition will further raise awareness, particularly  among  photographers, editors and other media professionals. “It’s [about] creating awareness, getting people talking about it. I think the more people get involved, it just means that hopefully they get over a hurdle they might come across.”

A free outdoor exhibition for Picture This runs from March 15-18 at the Atrium, Federation Square. To see a selection of images that reflect the survey findings see www.istockphoto.com and search “PictureThis”. How do you picture mental illness? Join the conversation now at  www.sane.org/picturethis.
Read the story originally published by Fairfax Media here.