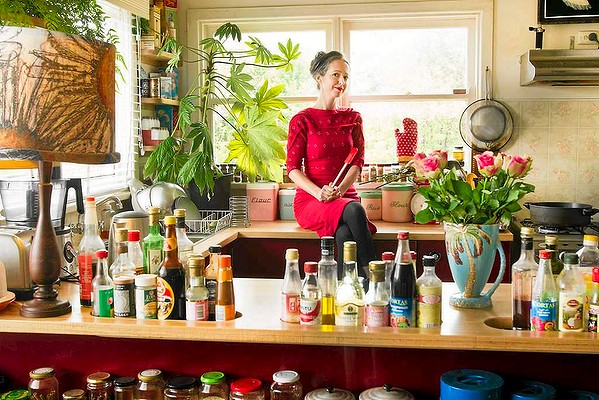 Marieke Hardy, 39, went vegan for a dare eight years ago and she hasn’t looked back. “I wasn’t even vegetarian,” she recalls of the transformation. “I went straight from eating blood orange duck at Billy Kwong’s and pork belly at Vue de Monde to nothing.” Hardy, known for being a panellist on the ABC’s The Book Club and co-producer of Women of Letters, a series of public events, began her animal-free diet during World Vegetarian Week, October 2008. Egged on by her vegetarian friend, Lindsay McDougall, Hardy says she experienced an interior “click” of realisation. “I really love animals and I really love food.” Veganism is on the rise, with 480,000 Australians currently estimated to practise the animal-free lifestyle diet (2 million call themselves vegetarians).Hardy, a self-described “total glutton and hedonist” now happily cooks vegan dishes for herself and friends in her Happy Days-meets-Jetsons Victorian country kitchen, designed and built by close friend Sime Nugent, of Sime Nugent Furniture.

You’ll find nutritional yeast (an inactive yeast also known as “nooch”), which gives everything a lovely, cheesy flavour, liquid smoke (great for barbecue sauces) and several different Massel​ stocks. I’m a salt freak and they make everything taste good. It’s hard to slow-cook a lot of vegan stuff but I use the beef-style stock to make a beautiful portobello mushroom bourguignon.

There’s usually Bonsoy​ and almond milk, Damona​ almond feta, Botanical Cuisine lemon, dill and cashew cheese and Daiya​ cheddar-style shreds (great for melting). But the cheese I would put on a cheeseboard is Vegusto​ – it’s f—ing delicious. I’ll put out a platter with mushroom pate, Vegusto, some olives, maybe some roasted garlic hummus or some tahini with preserved lemon and garlic and crackers. There’s also Nuttelex​ and Vegenaise​ (no egg, no dairy).

I had smoky barbecue-grilled tempeh, marinated in stock, soy sauce, apple cider vinegar, garlic, oil, maple syrup and liquid smoke. I roasted brussels sprouts in heaps of oil and salt until crispy and then stirred through a spoon each of tahini and maple syrup. It was amazing.

I’m a white wine drinker: pinot grigio, pinot gris and in warmer weather I like riesling and champagne. Yalumba does vegan wines [clarified without using egg, fish or milk] but it’s become second nature to turn the bottle around and check. I’m drinking a “The Ned” sauvignon blanc from Marlborough in New Zealand at the moment. I also like whiskey and port and nice hot toddy in winter.

I love my food processor and blender, especially for making cheese sauces. And spatulas! They’re one of my favourite things in the kitchen (I love a plastic spatch, they’re so malleable and great). Otherwise, I think Scanpans are the best and I have a great glass jug that measures up to four cups.

Veganomicon: The Ultimate Vegan Cookbook, by Isa Chandra Moskowitz​ and Terry Hope Romero, was one of my first cookbooks when I turned vegan and the two girls that put it together (also behind website the Post Punk Kitchen) are vegan high priestesses in America. And there was an Australian blogger called Carla who did a website called easyasveganpie.net. I would give her recipes to anyone considering becoming a vegan.

My Bob Hawke “take the piss out of Bob” wine keg. Someone gave it to me years ago. I’m a real politics junkie so any kind of accoutrement that is based somewhere in politics is exciting to me. It’s so kitsch.

I get very emotional when I eat really delicious food. Last year I went to Crossroads Kitchen, this absolutely amazing vegan fine-dining restaurant in Los Angeles run by Oprah’s former chef. After the meal I got so emotional, I asked to see the chef. I hugged him and I cried on him a little bit. He was very nice about it.

The Ottolenghi​ artichoke pilaf. I’ve been cooking it a lot lately for non-vegans because it’s a kind of really rich introduction and it doesn’t freak them out. It’s really simple: it’s artichokes and I put smoked almonds and olives in there and make a paste of green chilli, preserved lemons and garlic. It’s very comforting to have on your own, too.

So Delicious cashew-milk ice-cream has been a bit of a game-changer. In my persistent search for palate pleasure it doesn’t just taste like a poor man’s substitute for something that was once rich and creamy. I’ve tasted a lot of terrible vegan ice-creams, so when you come across something that’s really beautiful and rich and satisfying it’s just a thrilling experience.

This story first appeared in the Good Food sections of The Age and the Sydney Morning Herald on 16 February 2016. Read it online at good food.com.au here.