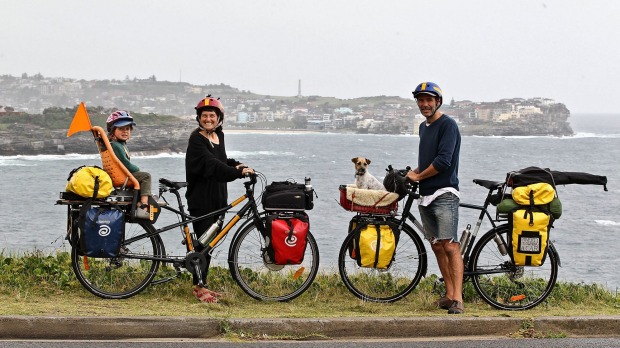 Green ants, fruit fly maggots and mangrove snails. Sound appetising? These were just a few of the delicacies one frugal family of foragers from Daylesford feasted on during their 14-month, 6000-kilometre bicycle adventure to the Top End.

What began as a carbon-conscious mission to gather research for a book about free foods in Australia turned into another book: The Art of Free Travel.

With Patrick Jones, his 10-year-old son, Zephyr and Jack Russell, Zero, on one (tandem) bike and Meg Ulman and their 14-month-old son Woody on another, the family “guerrilla camped’ and bartered their way to Cape York and back, starting on November 15, 2013.

“What we’re trying to do as a household is model a way in which we really attend to our carbon outputs,” says Jones, 45, on a brief stop promoting the couple’s newly released book. He believes the first step in combating ecological damage and climate change is to recognise how we move around and how our resources – particularly food – come to us. “We’ve been scrutinising those two things in our lives for about seven or eight years.”

Back in Daylesford, the car-less family grows their own vegetables and fruit, and regularly campaigns to raise awareness about carbon and climate change.

Jones estimates that 10 per cent of their diet is now derived from “wild plants”, including bitter greens such as dandelion, mallow, hawksbeard, flatweed, plantain and stinging nettle. “They have really good [health] benefits but they also plant themselves – they don’t need any agriculture fossil fuels.”

Travelling by bike was dangerous at times but Jones and Ulman hope their example inspires more people to choose pedal-power over petrol. “It’s not as wonderful as walking but you’re going at 10 to15kp/h and you’re living outside all the time. All those normal pressures and anxieties of modern life just dissipate.”

“There are days when you just get hammered by the weather and your tents get drenched and things just go pear shaped, but the overall ‘climate’ is just remarkable. It’s just a wonderful way to live.”

The modern-day swag-people travelled through several Indigenous communities, including Palm Island, but always sought permission from them to camp, thereby testing the boundaries of Australian law and Indigenous land ownership. Despite this, they ran into the police only twice – once in a case of mistaken identity and once on the central coast of NSW. “We were getting pretty brazen in our guerrilla camping at this stage. We pulled up on dusk to a nice little reserve overlooking the Pacific Ocean and thought, ‘this looks good’ and some neighbours dobbed us in.”

Their ultimate aim, though, is to show others how it’s possible to live simply and sustainably. “There seems to be an idea in Australia that ‘we’ll just wait for governments to fix it’, and that’s making our governments very sluggish to do anything, especially when it comes to climate change.”

“Our fundamental message is that a family of very low monetary means can enact these changes, therefore, maybe, so could you.”

Read the story originally published in The Age, here.